Singapore
Fully Operational with Expanded Resources
Click for the latest on how KEYENCE is continuing to support our customers with quick delivery, off-site testing, virtual demos and more.

Even More Useful When Connected to a PC

The configuration software, IG Configurator, allows for a wide range of settings to be made including the monitoring of the waveforms of received light and the measurement modes.

The user can enter all settings including the measurement modes into a PC and then transfer them to the sensor. The management of setting data is simple and very convenient when two or more sensors are used. 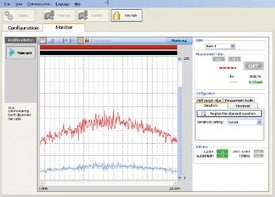 Measurement conditions such as the waveforms of received light can be displayed in real time. The mounting and sensitivity settings can also be adjusted more precisely.

(if a measurement target is large)

(to measure the difference in level or inclination)