The FT-50AW(P) and FT-55AW(P) come with functions that can be used on-site, eliminating complexity and difficulty.

What is the emissivity?

Other Functions That Expand the Scope of Applications 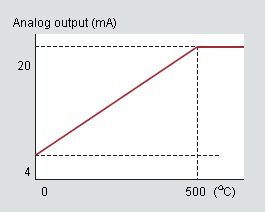 The FT-50AW (P) and FT-55AW (P) can each store two upper-limit outputs and two lower-limit outputs. They can also be configured for up to 4 emissivities. This eliminates the need to reset emissivities for each product changeover.

The IR mode displays the quantity of far-infrared rays received by the thermopile so that it acts like an intensity sensor. Because of
this, the FT-50AW (P) and FT-55AW (P) could be used just like a photoeye to detect presence or absense of hot materials.

The Power Saving function provides a simplified display when the sensor is left alone for a fixed time.

* If the Analogue Monitor Output function or the Timing function is used, up to two banks can be used.
If both functions are used, only one bank can be used.